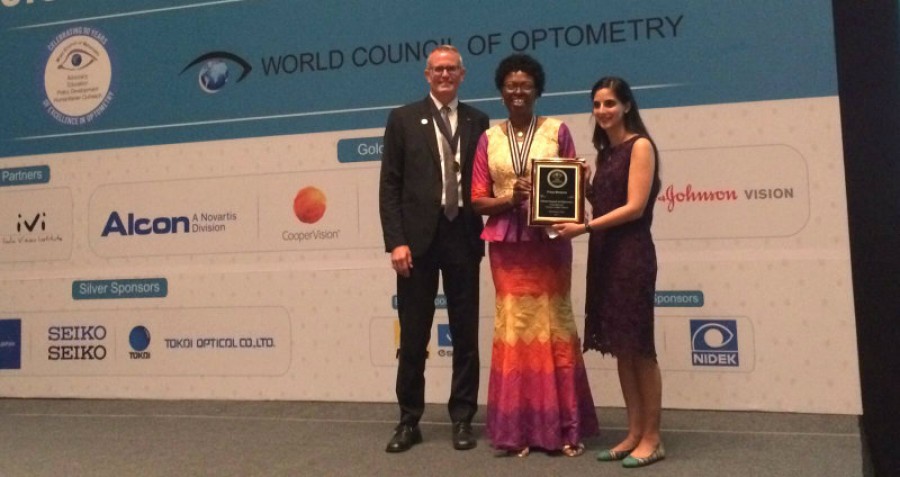 Peek Research Lead Priya Morjaria has won a prestigious award for her outstanding contribution to optometry.

Peek Research Lead Priya Morjaria has won a prestigious award for her outstanding contribution to optometry.

The award is for an optometrist who has made an outstanding contribution over time to the achievement of WCO’s Vision and Mission and shows promising future leadership in world optometry.

As well as her role at Peek, Priya, 34, is a Research Fellow in Public Health at the International Centre for Eye Health (ICEH) at the London School of Hygiene & Tropical Medicine (LSHTM).

She trained in optometry at City University, in London, UK, and is a member of the College of Optometrists and the European Academy of Optometry & Optics. She completed her MSc in Public Health for Eye Care at LSHTM in 2008 and joined ICEH as a researcher where she is currently completing her PhD.

Priya’s PhD research focuses on improving the efficiency of school programs for uncorrected refractive error with a regional focus on India.

She has a breadth of experience in eye research in developing countries including Kenya, Malawi, Mozambique, Ethiopia, Zambia, Bangladesh and Nepal. She is involved globally as a member of both the Refractive Error Working Group and the School Eye Health Working Group of the International Agency for the Prevention of Blindness (IAPB) as well as the WCO Public Health Committee.

On accepting the award, Priya said: “When I was told I had received this award I was quite overwhelmed… I feel like I started this journey a long time ago when I was about seven, being carted off from boarding school in Kenya and Tanzania and the teachers thought I wasn’t paying attention but it was just I couldn’t see the board… In 2008 I did the Master’s at the London School of Hygiene & Tropical Medicine and since then I haven’t looked back.”

She thanked colleagues including Dr Andrew Bastawrous, CEO and co-founder of Peek, and her PhD supervisor Prof Clare Gilbert.

Priya receives her award at the 2nd World Congress of Optometry, September 2017.