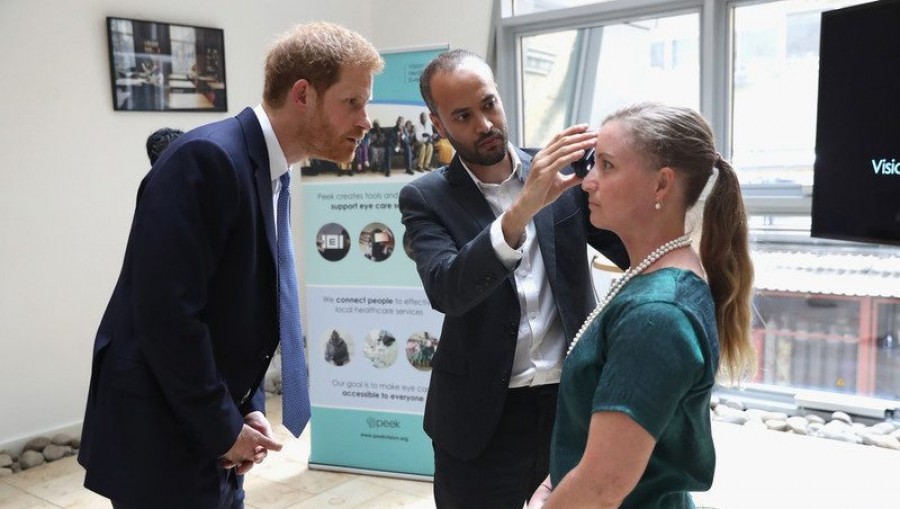 Andrew said: “It was an honour to have the opportunity to talk to Prince Harry about Peek."

During a visit to the London School of Hygiene & Tropical Medicine, he met Peek co-founder and CEO Andrew Bastawrous, who is also Assistant Professor in International Eye Health at the School, along with other members of the Peek team including members from India and Botswana.

Andrew explained how Peek’s School Eye Health Programmes work and the problems they seek to solve of young children not reaching their potential because they can’t see properly. He also showed the Prince the Peek Acuity app and Peek Retina in action.

Prince Harry was at LSHTM for a special roundtable discussion on HIV/AIDS in his role as Co-Founding Patron of the charity Sentebale. Global HIV leaders and researchers heard first-hand from youth advocates from Botswana and Lesotho and committed to ensuring young people affected by HIV/AIDS play an integral part in shaping new research and policies to strengthen prevention, testing and treatment in sub-Saharan Africa.

Before the meeting, His Royal Highness joined School Director Professor Peter Piot on a tour to meet researchers investigating and working to find solutions to a number of health challenges including the Peek team.

Andrew said: “It was an honour to have the opportunity to talk to Prince Harry about Peek. He has spent a lot of time in Botswana and was particularly interested in the progress we are making on delivering a national school eye health programme with our partners.”

The Earl and Countess of Wessex have previously been shown and used Peek.