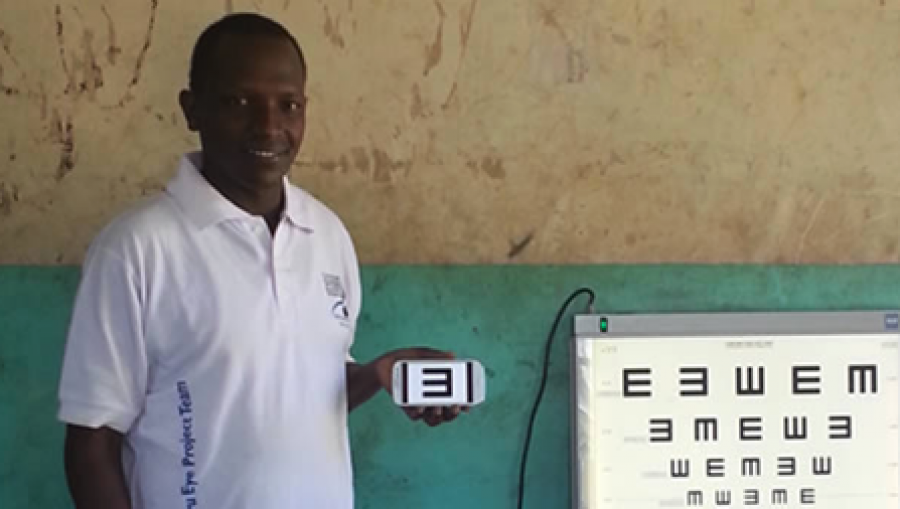 Peek Acuity, the app used to test eyesight easily and affordably using a smartphone, is as accurate as traditional charts, according to a study published today.

Peek Acuity, the app used to test eyesight easily and affordably using a smartphone, is as accurate as traditional charts, according to a study published today.

Peek (the Portable Eye Examination Kit) is a unique smartphone-based system for comprehensive eye testing anywhere in the world which has been designed and developed by the International Centre for Eye Health at the London School of Hygiene & Tropical Medicine, the University of Strathclyde and the NHS Glasgow Centre for Ophthalmic Research.

Globally, 285 million people are visually impaired and 80% have diseases which could be cured or prevented. However, most live in low-income countries and remain in the dark because of limited access to specialist clinics. Peek offers a solution by enabling health workers to test eyes easily and affordably in the community.

The research, published in JAMA Ophthalmology, shows that the results from the app tests carried out on 233 people in their own homes and repeated in eye clinics based in Kenya were as reliable as those from standard paper-based charts and illuminated vision boxes in an eye clinic. The app vision test is designed not to be dependent on familiarity with symbols or letters used in the English language.

Tests in patients’ homes found that Peek Acuity produced results to a clinical level equivalent to the much larger and more expensive standard electricity dependent chart – the average difference being the equivalent of less than one line on an eye chart.

Lead author Dr Andrew Bastawrous, Lecturer in International Eye Health at the London School of Hygiene & Tropical Medicine and co-founder of Peek, was struggling to transport bulky eye equipment to remote areas in Kenya when he decided to try to create a future replacement for the equipment with a phone-based testing system during a six-year follow-up of the Nakuru Eye Disease Cohort.

The Peek validation study was nested within this community study between December 2013 and March 2014.

Dr Bastawrous said: “With most of the world’s blind people living in low-income countries, it is vital we develop new tools to increase early detection and appropriate referral for treatment. Mobile phone use is now so widespread that it seemed to be an ideal platform.

“In this study we aimed to develop and validate a smartphone-based visual acuity test for eyesight which would work in challenging circumstances, such as rural Africa, but also provide reliable enough results to use in routine clinical practice in well-established healthcare systems.

“Our ultimate hope is that the accuracy and easy to use features of Peek will lead to more people receiving timely and appropriate treatment and be given the chance to see clearly again.”

Peek consists of a series of apps and a unique piece of hardware called Peek Retina. This study focused on one of the apps, called Peek Acuity, which determines how clearly an individual sees. It features a “tumbling E” on screen, showing the letter E displayed in 1 of 4 orientations. The patient points in the direction they perceive the arms of the E to be pointing and the tester uses the touch screen to swipe accordingly, translating the gestures from the patient to the phone, as the image gets smaller.

Tests (using Peek Acuity at a distance of 2m and a reduced 3m “tumbling E” Snellen chart) were carried out in the participant’s home and in the central clinic on two consecutive days.

Average testing time was also measured and found that the familiar and commonly used Snellen test took 82 seconds compared with 77 seconds for Peek Acuity which shows that using Peek is as quick to use as traditional methods.

Although the researchers acknowledge the fact this study only involved Kenyan adults aged 55 and above, they are conducting other studies to determine the suitability of the tool in different contexts across a range of different handsets and operating systems, including a trial involving teachers testing over 20,000 schoolchildren.

The Nakuru Eye Disease Cohort Study was funded by the Medical Research Council and the Department for International Development, and Fight for Sight. Additional funding to support the Peek study was provided by the International Glaucoma Association and the British Council for the Prevention of Blindness. Funding for ongoing Peek trials is provided by The Queen Elizabeth Diamond Jubilee Trust.