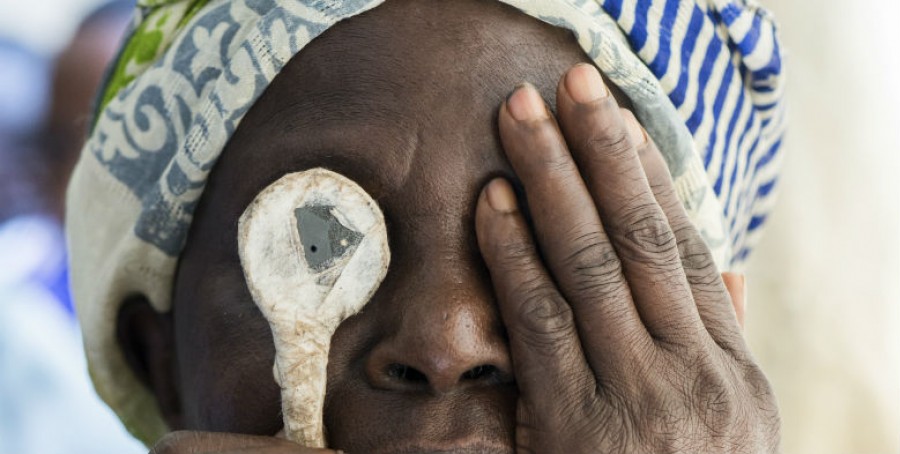 Maria took two more steps and threw herself on to the side of the road, turning to make sure her six-month-old baby, swaddled across her chest, was protected.

The noise of the road was overwhelming. Cars and trucks flew by as Maria was attempting to cross. It was still early and the sun hadn’t risen but the traffic was building up. Crossing a busy road is a challenge at the best of times, but if like Maria you’ve been blind from the age of four and have never crossed the road alone it is a terrifying experience. Maria was going to visit a team of eye specialists she’d been told were around for that day only. A friend had told her the route and that she needed to get to a white sign by the highway, which was the crossing point towards the town. Although she hadn’t seen the white sign it was obvious to her the highway was in front of her. She could not only hear it but also feel the lorries, cars and motorbikes fizz past. She waited to see if a passer-by might guide her across but no one came.

Eventually, the road was quiet, she stepped out and slid her feet on the tarmac to avoid tripping, moving carefully but urgently to the other side. A loud vehicle approached from her right with a deafening horn. Maria took two more steps and threw herself on to the side of the road, turning to make sure her six-month-old baby swaddled across her chest was protected. She could feel grass and sand beneath her and knew she’d made it across – just.

The last time Maria remembers seeing anything was in nursery school. Now she was married, living with her husband on a small shamba (allotment/plot of land) with her three children.

Her life had been limited severely by her vision. She could recognise her children from their voices and even by the way they moved or ate, but she longed to see their faces.

The next few hours were a blur, walking, tripping, crawling, asking for help until as the hot day’s sun began to cool she eventually found the eye clinic. It was being hosted in a university building on the edge of a car park. Someone in the car park told her the clinic was closed and they were packing to leave. But the team was still in the room and they guided her to the entrance. Maria, now exhausted, her nerves frazzled, her baby whimpering, stepped in feeling desperate, alone and very scared. She was met by one of the eye team, a caring lady called Roselyne who in minutes was able to calm her down and persuade the medical team to examine her.

Maria had cataracts in both eyes, her pupils were white and there was no view of the inside of her eye.

The team didn’t think the surgery would be successful despite her cataracts looking very operable. Given it had been so long since she could see there was a high chance that even if surgery went well Maria would still not be able to see. Maria was compassionately looked after by the team and brought in to the hospital for surgery the next morning.

To everyone’s surprise, she could see – Maria was absorbed by her baby daughter, exploring every crease and feature, and soaking up her smile, while those around her, staff included, were brought to tears by the sight of her seeing and her reaction to her baby.

Along with the other patients from the university clinic, Maria was shown how to self-administer eye drops; keep the eye clean and given advice on what to do if there was a problem. They were then ushered to the hospital van to be taken home and dropped in the car park they’d been collected from.

The patients all dispersed, eager to get home, except for Maria. She stood there, looking around with no idea where to go because she didn’t know where she lived.

Maria recounted to the hospital team that people had been talking about a “white sign” near where she lived by the highway. The next three hours were spent driving up and down the highway looking for this white sign but with no joy. They frequently stopped to ask people if they knew where a white sign was or, pointing to Maria and her baby in the back, did they recognise Maria? This went on well in to the afternoon until they came across someone who had heard of a young woman from a place not so far away who was blind and pointed the team in a direction that was off the highway. With little else to go on, they explored the route and amazingly found the sign, at the junction of a dirt road.

Nearby they found a lady tilling the soil and asked her if she knew Maria? “oh yes!” she said, “she is my neighbour”. Maria recognised her by her voice and embraced her, explaining that she could now see and pointing out all the surroundings, as though providing evidence. Her neighbour said Maria’s home was close so they went to get back in the van but there was no road and so set off walking the 15 minutes to her house. Word had got out and children started following Maria, her neighbour and the hospital team along the path. They soon came up to a basic mud structure with three small rooms. The open room, a traditional kitchen with stones for fire on the floor and several children gathered outside, including some who had been following.

As soon as she arrived, with so many kids there she asked, “which are mine?” She didn’t know which were her own, until two children ran forward throwing themselves at their mother and gripping her tightly.

Maria, leaning over to her neighbour, whispered, “Where is my husband?” The hospital team later confessed they were worried that he might turn out to be an old man who had taken advantage of a young blind woman, however a shout from behind the house came, “Maria?!” – he turned out to be young man who was clearly delighted to see his wife again and even more so, to be seen by his wife.