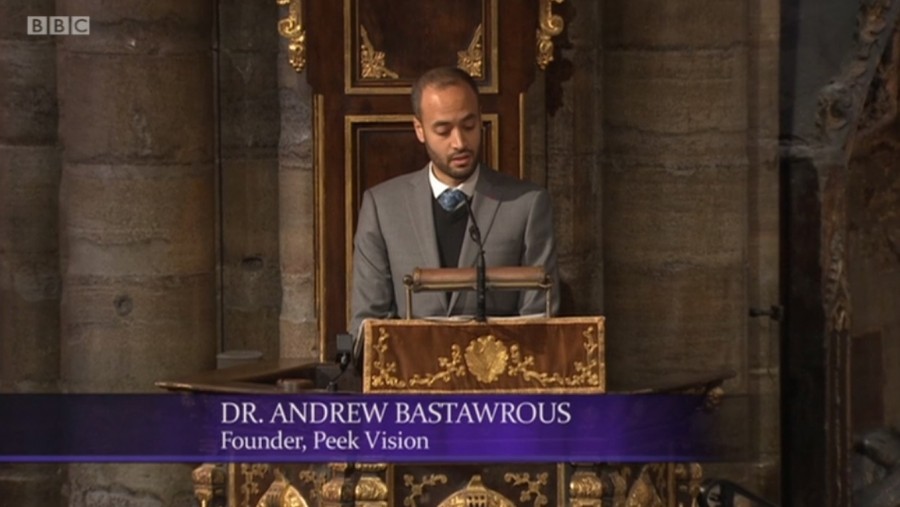 "For the first time in human history, it is within our power to eliminate avoidable blindness and poor vision, for everybody, everywhere..." - Dr Andrew Bastawrous

On Monday 12 March 2018, Peek CEO Dr Andrew Bastawrous had the honour to speak about vision in the presence of Her Majesty The Queen, Head of the Commonwealth, other senior Members of The Royal Family, the UK Prime Minister, and delegates from across the 53 Commonwealth countries.  His reflection was part of the annual Commonwealth Service at Westminster Abbey, London, UK - watch it on our YouTube channel or read the full speech here:

"Mama Philip was 80 years old. When I first met her in Kenya she had been blind for 20 years, and was dependent on her son Philip.  Living an hour’s walk from the nearest road, she was unable to walk or cook for herself.  Her family thought she had dementia.

When people lose their eyesight, they often lose their independence, their dignity, and their capacity to be a productive member of the community.

A healthcare worker examined Mama Philip and referred her to our clinic. When I examined her I realised her problem was not dementia – it was cataract, a curable condition. And yet, she had lost two decades of her life.

Sadly her story is not unique.  85 Million people across the Commonwealth are blind or have very poor sight. 4 in 5 unnecessarily so, like Mama Philip they have a treatable condition.

I could have been one of them. I was diagnosed with severe visual impairment at the age of 12, but I had access to simple treatment, a pair of glasses. I’ll never forget the moment I tried them on. For the first time, I saw leaves on trees.  Later, I saw stars in the night sky.  It was breathtaking.

What else had I been missing? It turned out a lot. With that simple pair of glasses my education, social life and hopes for the future changed dramatically, in fact, the entire trajectory of my life changed.

I knew from a young age that the opportunities I had were not universal. It ignited a fire in me, which led me to become a doctor, then an eye surgeon. In 2012 I left my role in the NHS and with my wife and our baby son we moved to Kenya to set up 100 eye clinics.

It was tough. We’d work day and night examining and treating everyone we could, but it soon became clear it would never be enough. Something needed to change.

With our team in Kenya, we began building smartphone apps and devices that made it possible for a non-specialist to measure someone’s vision, see inside their eye and connect them to the right services.

This work was replicated and refined in India and then in Botswana, which is now set to screen and treat every school child in the country by 2020 - a world first.  An entire generation of school children will have access to good eye health and all the opportunities it brings.

Advances in technology, treatment and public health mean that for most, poor vision and blindness no longer need to be a life sentence.

For the first time in human history, it is within our power to eliminate avoidable blindness and poor vision, for everybody, everywhere. Every country in the Commonwealth has the opportunity to transform their citizens’ eye health, in a matter of years, not generations.

But no country can do this alone. Our work wouldn’t be possible without collaboration from our friends and partners in Kenya, India, Botswana and beyond. That is why the Commonwealth is so important - we have a shared history, but more importantly we have a shared future.

By working together, we can make that future better for millions of citizens across the Commonwealth, and across the world. At a time where there is such focus on division, vision can unite all of us.

That’s why, inspired by the leadership shown in Botswana and by the commitment of many others, leading eye health organisations and banks are establishing a $1 Billion Catalyst Fund to enable all Commonwealth countries to move towards universal eye health. The Commonwealth can be an example to the world of what is possible when we unite around a cause.

When we do, we will hear more and more stories like that of Mama Philip, the lady who’d been blind for 20 years.

Her surgery was a success. She looked years younger, and was no longer displaying any signs of dementia.

Later that day we took her home. We watched the sheer wonder as she took in her surroundings, then the anticipation to see faces that had become voices, as we arrived.

A man was stood at her door, expectantly.  After what seemed like an eternity, she looked intensely at a scene that looked so familiar yet different and eventually asked, “Philip, my son, is that you?”

Moments later they embraced and the community celebrated. We can be that community."