When all’s said and done, it was worth it. A blog from Botswana. 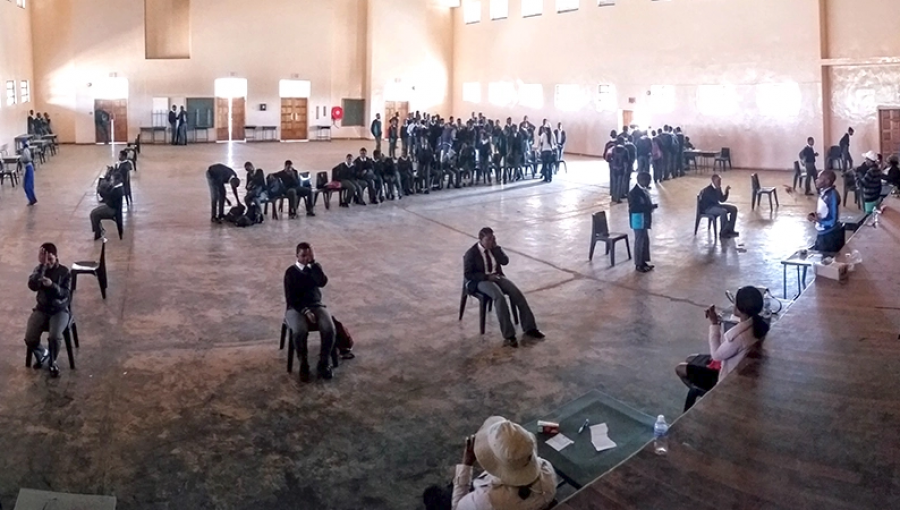 What does screening almost 13,000 school children in three weeks involve?

Nothing really prepares you for the Morolong winter. This is because, if we are being completely honest, the winter season in Botswana ends in July, with the exception of the Goodhope sub-district known as Morolong where it was August and it still felt like we were right in the middle of winter. Without fail, every morning I struggled to leave the room but, when I did, I quickly remembered why I had been reluctant in the first place. Some mornings you were guaranteed frost on the bare vegetation around the lodge. But in the midst of this seemingly gloomy morning, you were treated to a magnificent sunrise, with its hues of different colours. Every morning was the same drill; hit the dining room for breakfast and to share our thoughts and plans for the day with each member of the Implementation Team before we set off to our different screening areas to test schoolchildren’s eyes using the Peek smartphone screening programme.

Just to paint a quick picture, we had a total of seven screening catchment areas, with one or two Peek Supervisors per area, and one Extended Programme for Immunization (EPI) supervisor as we were integrating our Peek pilot programme with an established EPI programme. Some catchments were semi-villages with electricity, running water, a supermarket and so on, and some were very remote villages, with only tuckshops, solar power or no power at all, and seasonal running water. However, every village had a school, a clinic, a health post or mobile clinic.

All nine Peek Supervisors had diverse backgrounds in terms of qualifications and jobs. These included ophthalmic nursing, education, research, information and technology, optometry and public health. This range of experience came in very handy when dealing with issues in the field such as an uncooperative student (the educators stepped in), pressing eye issues with the children (ophthalmic), or interactions between the system and the user (IT).

As part of the EPI programme, after being registered and screened with Peek, the students had to be vaccinated and it was this that scared many students. I recall one student unable to respond to the screener because her eyes were fixed on the nurse with the vaccinations instead of the Peek phone screen. We tried to get her interested in the app – nothing – the class teacher and even the school head tried to coax her, and nothing. Her aunt was then called, and as if by magic (ok not real magic, but persuasion) from her aunt over the phone, the child was able to be screened.

Having been in the field as long as we have, you are bound to make acquaintances, and one older gentleman comes to mind. He was a road worker along the main road that was connecting the villages in my catchment, and a good friend of my co-supervisor.  Without fail, every time we saw him, he made our day that much better, the atmosphere in the car was that of laugher, mainly due to the light-hearted banter between him and my co-supervisor, whether about sweets, donkey meat (donkey meat is eaten quite a lot in those parts of Botswana), or their favourite topic: the old man’s retirement.

On another occasion, we had just wrapped up after a long day and everyone was keen to get home when we got a call from another supervisor in another catchment. One of our cars in Mabule had two punctures and they needed assistance. Mabule was at least two hours’ drive of rough terrain away from where we were in Phitshane. I was exhausted and I have no doubt my colleagues would also have liked nothing more than just to rest, however duty called. We made it to Mabule, helped them out with a spare wheel and got them back on the road. By now it was already late afternoon and the sun was setting. I tried to sneak in a nap, which the designated driver allows (a rare thing because he usually has a “No Sleep Policy” for the passenger in the front seat). But just as I settled down, I caught a glimpse of the sunset in the rearview mirror. Beyond the dusty trail we left behind us, I could see the faded colours of the sunset: orange, fading into a light purple and finally a shade of pink. It was beautiful.

As a team, we hardly had time together during the day as we were all always so busy, and from this “The Dinner Ritual” was born while we were on the programme and away from home.  Every night from Monday to Thursday, we sat around the table and ate together. This meant each member of the Implementation Team could share their day in the field, the challenges that they faced, successes and special moments. I can’t begin to count the many solutions that emerged from this ritual that became very instrumental in the field, from workflows to how to deal with special cases. Secondly, it did wonders for team morale. The jokes and laughs were very much needed after a long day and it also gave us a lovely feeling of home which helped when we were all away from our families for such a long time.

Looking back now, there is very little I would change about the weeks we spent in the field because at the end of it all, almost 13,000 (12,877) students from all 49 schools got access to eye screening in three weeks. More than 2,000 (2,065) were referred for further investigation, an eye test and spectacles if needed, looked after by local optometrists. Of those investigated, 835 were prescribed spectacles which were distributed on a later visit and 94 were given eye drops and regular check ups at the local Goodhope Eye Clinic. Just over 60 were referred to Scottish Livingstone Hospital to see an ophthalmologist in case further treatment or surgery was required for more complex cases and eye diseases.

I remember when the first students got their spectacles. I was there to witness it and saw the end result of the hard work: their shy but happy faces, their excitement and the gratitude of the teachers. All these were wonderful reminders of why we did this in the first place, sitting through meeting after meeting, training, and being away from home for so long, to make sure that people in the remotest of areas got access to eye health services, and to bring the world that much closer to reducing avoidable blindness

And so when all’s said and done, the early mornings, the bitter cold and the late hours were definitely all worth it.