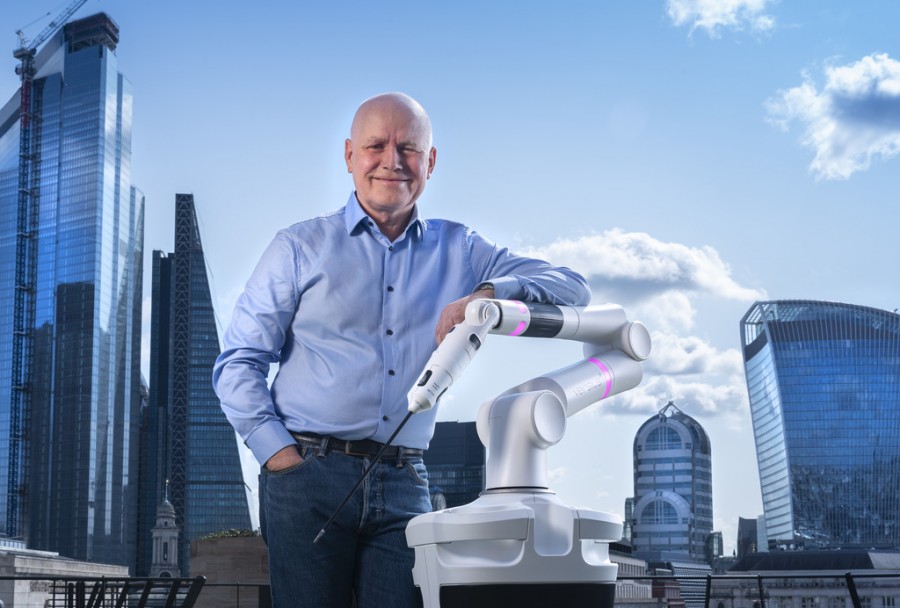 "Peek has undergone a transformation from being a diagnostic tool to enable people to see remotely whether they’re in need of eye services to actually now attacking a more important and deeper challenge: how do we stop people getting left behind?"

In April 2020, Martin Frost became the Chair of the Peek Vision Foundation.  He is a co-Founder of CMR Surgical, one of the UK’s fastest growing medical device companies.  As former CEO of Sagentia, he worked with Vodafone and Safaricom to launch M-Pesa, one of the world’s first mobile-phone-based financial services for low- and middle-income countries.

A career in technology breakthroughs

I started my career in accounting, which trained me to understand balance sheets, cash flow statements and financial sustainability.  Those things have stayed with me, but not long after that I discovered I could also write software. That took me into a whole new world and - because of my other skills in languages and finance - I ended up having this unusual role of rolling out IT systems across the whole of the company and they sent me around the world to do it.

I eventually became finance director and subsequently CEO at one of Cambridge's larger technology consulting companies in the late 1990s.  That got me close to lots of breakthrough technology and working out what the best way of generating value from that technology was.

I've remained curious and interested in technology but I'm actually more interested in the people around the technology and in what it takes to lead teams of people bringing different skills to solve a problem.  These days, my primary interest is helping CEOs and ambitious leaders overcome really difficult challenges or problems.  We're only on this planet for a certain number of years so I feel like we should invest the years trying to solve the really hard problems!

When I was at Sagentia, we built - with Vodafone and Safaricom - what has become the world's leading mobile money platform, M-Pesa, which stands for ‘mobile money’ in Swahili.  The original goal was to get a thousand people using the technology within a year or so.  It is now the world’s most successful mobile money service, has 17 million users in Kenya and moved around 11 billion transactions in 2019.

The problem that we sought to get our heads around with M-Pesa was how we could enable people in the urban areas of Kenya to send money home to people in rural areas.  Before M-Pesa, the only option for many people was to send money via a bus or taxi driver.  There was no assurance or security that the money would arrive at the other end and, on top of that, the sender was paying the driver quite a lot of commission.

Of course a lot of software needed to be developed to enable people to enable M-Pesa to work, but ultimately, it was successful because of the commitment and multi-skilled team that we put together.

By enabling people to send money from urban to rural areas, you don’t just solve an individual’s problem, you also enable growth in local economies as well.  The fact that M-Pesa was widely rolled out in Kenya enabled other people to build on that tool, leading to more innovations around microloans, agricultural insurance and more.  When you see a team of people deliver on something that is well beyond what anybody imagined, it gives you a sense of what is possible.

Getting involved with Peek Vision

I first met Andrew Bastawrous when he was working out how Peek should be set up as an organisation.  I remember Andrew being very, very clear in his own mind that there was really only one thing that mattered, and that was for Peek to fulfil its purpose and deliver its mission.   That stuck with me.

Around the middle of 2016, I was asked to join the Peek Vision Foundation Board.  I find Peek is very much purpose-driven, caring both about the mission, the people it is trying to reach and also the team of people that represent Peek.

Peek has undergone a transformation from being a diagnostic tool to enable people to see remotely whether they’re in need of eye services to actually now attacking a more important and deeper challenge: how do we stop people getting left behind?

I have spent most of my career working close to technology, innovation, and wanting to change markets and people's behaviour.  The journey that Peek has been on, from being primarily a product company to now a company delivering programmatic benefits across healthcare systems, makes a lot of sense.

I’ve been very fortunate to have had quite a diverse experience over many technologies and many geographies and I hope that some of those experiences will be useful to Peek.  But it's two-way learning - I learn easily as much from Peek as Peek learns from me!

Peek is a disruptive technology.  It is challenging - and needs to challenge - the way that we measure health inputs and outputs.  I think there's an awful lot of what goes on in the charitable health sector which measures activity, because that's what people want to fund, but it doesn't measure whole system effectiveness.

If you improve somebody's eyesight then economically it is proven that’s probably the single best thing you can do to help that person.  Ultimately this is about reducing the number of people who are unnecessarily suffering because they have an addressable or curable eye health issue.

I think creating forums for exchange of ideas, where people come from different perspectives, don't naturally agree and then resolving it, whilst keeping them committed to one another personally - that's leadership.  I've always been lucky enough to work with companies and Boards that have embraced that.

The reason why Sagentia got involved in M-pesa and the reason why I did CMR Surgical, is because there's a need.  These are hard problems to solve, but what I've discovered is if a problem is hard to solve, it's likely that in solving the problem you're solving it for quite a lot of people.

Andrew Bastawrous, Peek co-founder and CEO: "I first met Martin in 2013, when Peek was a research project.  After that meeting I was struck by his vision and clarity and wrote down that I'd love him to be on the Board when Peek spun out. Four years later he joined our board and I'm delighted he is now Chair.  Having a Board who are actively involved in our work is really important to Peek, and we receive invaluable support from Martin and the rest of the Trustees."